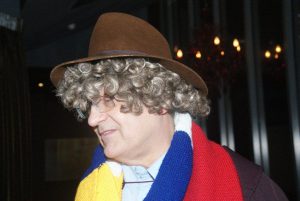 What ho! All.  Most of my working life, apart from a brief but intriguing spell in the UK Meteorological Office, has been in Computing, from the very early 1960s to the present.

In my early computing days, I was fortunate enough to be involved with R & D in hardware and software design, with a particular emphasis in telecommunications. Exciting times I can tell you.

More recently I have devoted much of my time and effort into obtaining a Physics Degree from Sydney University, with most of my electives being in music. It’s been a challenge.

Writing-wise, I have, over many years, been diligently (with little professional success, but honestly, I don’t care) dribbling out a number of short stories, odd musical works and, with my friend and ol’ buddy, Dallas, produced a number of TV scripts and audios based around the Doctor Who, Sci-Fi genre.

My first encounter, (of the third kind?) with Doctor Who occurred at the very first episode, way, way back in 1963, 23rd November. The assassination of John F. Kennedy, the day before, was still uppermost in everyone’s consciousness, but I was highly intrigued by the prospect of a new Sci-Fi BBC drama, having indulged in Aunty’s, Quatermass I & II, The Black Cloud, A for Andromeda.

I was full of anticipation – and – I was not disappointed!

For me, that first episode still rates as the best of all time. Brilliantly downplayed, in the foggy backstreets of a somewhat grimy part of London, all seemingly innocuous: there’s a brilliant school-girl, yet strangely out of touch with the mundane; two caring teachers; a grumpy ol’ granddad (with whom I can, now, really identify) and somehow they all meet up in a junkyard, in, what’s this?

A Telephone Box! That can travel through Space and Time ‽

I’m not a fanatical – fanatic, I can’t tell you who served the sandwiches on a particular Friday afternoon rehearsal (I’m sure there are some people who know this) but I am fanatical about the Doctor Who concept, the genre, the freedom it gives to those with imagination to create and realise the stories and the demands it makes on the imagination of the audience.

Just recently I have become more and more interested in the film/video mediums and I hope to put my experiences in this field to good use with some original Doctor Who and Sci-Fi videos.

So, here I am, well over fifty years later, Secretary of the Doctor Who Club of Australia for over 20 years (I’ve lost count actually) and still enamoured with Doctor Who, Sci-Fi, and the creative imperative.